Football: Gloucester Catholic wins third in a row over Gloucester

Despite a sub.-500 record, Gloucester Catholic won its most important game of the year, 30-14, over crosstown rival Gloucester in a Thanksgiving Day showdown.

GLOUCESTER – Dashaun Harris had himself quite the day on Thursday.

Harris, who plays running back and defensive back for Gloucester Catholic, has long been an integral part of the Rams roster. In the Rams annual Thanksgiving Day showdown with crosstown rival Gloucester, the senior again found himself in the middle of all the action.

Still when the stat sheet comes out there will be one play that stands out.

“Yeah, I got a touchdown pass too,” Harris said with a broad smile. “No better time to get it then against Gloucester.”

For the third straight season Gloucester Catholic came away with a win over their own version of “The High” on Thanksgiving, this a 30-14 victory with plenty of traditional rivalry chippy play and extra talk. Gloucester may have scored first but the next 24 points were owned by the Rams in a win that is the perfect ending to a tougher season.

“This is as big as it gets for us,” said Catholic head coach Casey Murphy, who proudly talks of growing up in Gloucester. “Growing up in this town, I eat breathe and sleep this game. For us, we’re blessed to have this game at the end of the year. Doesn’t matter what the records may be, this is a way for us to finish strong.

“This is our biggest day no matter what. For us to come out, playing well at least at the end of this season, we’ve taken control of this thing over the last few years.”

A big part of that has been Harris, who looked dominant in the run game from the outset. Down 6-0, Harris helped the Rams move the chains early with a pair of runs to set up a 38-yard scamper by Scott Griffin to tie the game at 6-6.

“It’s huge to be able to contribute in this game,” Griffin said. “I haven’t carried the ball much but in the last few games I’ve gotten a shot. I have to take advantage of every chance I get so this was big.”

On their first offensive play of the second quarter the Rams went to Harris, who went 63 yard for a 12-6 lead.

“The line gave me the hole,” Harris said. “All I needed was that hole.

“The last three years we’ve won this game and I know how big it is. There is nothing like a rivalry game and ours is one of the best.”

Before the end of the half, Harris had an interception that he took all the way 82 yards for a score, but it was called back due to a penalty. The run itself seemed to cover over 100 yards as the senior cut back and forth along the right side of the field with both teams laying out hits every chance afforded.

“I did score there,” Harris said with a laugh. “That took forever. I just kept running.”

Gloucester made it interesting with a touchdown late to make it 24-14, but the Rams went on a drive that all but ended the afternoon. From the Gloucester 13, the Rams went with a pass option for Harris. The snap was low and Harris picked it up and took a step or two to his left.

“To be honest, I forgot he had an option once I saw the ball on the ground,” Murphy said. “I just wanted him to cover the ball.”

“No way,” Griffin said with a laugh. “I thought no way was that ball coming to me. When I saw it on the ground I thought (Harris) was going around the left to score. I thought I was out of the play. I never thought the ball would come my way.”

“Saw him the whole time,” Harris said. “Just had to throw him the ball.”

Harris stepped out of the way of two Lions' linemen who collided into each other and lofted a pass back to his right. Griffin caught it at the five-yard line and the found his way into the end zone.

“Honestly, I had no idea what to do,” Griffin said. “The ball was coming at me and I kept thinking ‘this isn’t right.’ I caught it and expected to get hit so I just spun left. After that, took two steps and jumped for the end zone. I’ll never forget that play. Great way to end a career.”

And an even better way for the Rams to end a season. 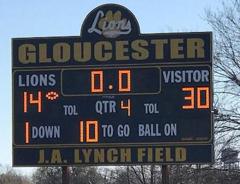 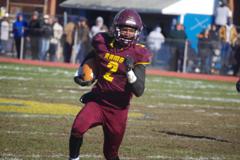