HADDONFIELD – There are programs throughout the region that would have be satisfied with a halftime lead.

The experience of being in a South Jersey final, with everyone riding on this game, many players would be happy to walk into a locker room holding a seven point lead. There is a lot that can be said about holding a lead halfway through any game and that’s the position Haddonfield found itself in last night against Camden in the South Jersey Group 2 final.

That said over the past decade the Bulldawgs have shown they are in the South Jersey elite and they put more into how they played than what the scoreboard hovering above a statue of a bulldog on their home turf indicated on a frosty Friday night.

“You would have thought we were losing,” Haddonfield head coach Frank Delano said. “These kids, this group of upperclassmen, these seniors have been through this. They were not happy with the points we left on the field. This was a game that we had a chance to seize in that first half and we left maybe 14 points on the field.

“That locker room was intense and to a man we all knew Camden is a great team. That we had a chance to put them away and we let them stay in the game so yeah, we had to play better.”

Haddonfield did play better and secured a 23-12 win over The High to win its fifth South Jersey Group 2 title in eight seasons. Haddonfield, ranked No.1 in several publications throughout the state, improved to 11-0 and still has its annual clash with neighbor Haddon Heights on Thanksgiving and in a new twist, a Bowl game against the Central Group 2 winner at MetLife Stadium the first week of December.

“It’s different,” Delano said. “Something is definitely off about all of this.

“I’m used to Rowan University for the Final. I’m used to this game being the end of the season. In the end, you play to win so we’re going to go up to MetLife and play our game. But we’re going to enjoy the heck of out that stadium and walking out of that tunnel.”

Against Camden (9-2), a team that had four shutouts and allowed just 34 points all year against New Jersey programs, the Bulldawgs wanted to get off to a fast start. Although just how fast they started came as a bit of a surprise.

“I caught the ball and ran straight,” said senior Chris Brown, who took the ball 87 yards on the opening kickoff for a touchdown and an early – really early, 6-0 lead. “I don’t remember the run. After I caught the ball I remember crossing the line and letting out a scream.”

Haddonfield scored again on its second possession that appeared stalled at midfield. But on a third and long, quarterback Jay Foley went long to brother John Foley, who came down with the pass between a pair of Camden defenders for a touchdown and a 13-0 lead.

“We have struggled early in games over the past few weeks,” said Brown, who led the team with 52 yards on 13 carries all of which came before the final quarter as Haddonfield needed the senior on defense more than offense. “We got up 13-0 but we wanted more”

A pair of turnovers hurt that attack and before half, Camden got a late score to give the Panthers some momentum.

“We know what their defense has done,” said defensive lineman Gabe Klaus, who registered three sacks on the night. But we’re proud of our defense too. They have a lot of weapons but we stopped their run and our defensive backfield was outstanding tonight.

“This was a total team effort.”

Camden opened the second half with a drive into Haddonfield territory but penalties and poor execution put an end to that drive. From that point, Haddonfield slowly put a vice grip on the game.

“That was a huge stop,” Delano said. “We had a chance to put them away and didn’t. Camden has a great team and a lot of talent that can put points up fast. To stop that first drive mean a huge difference.” 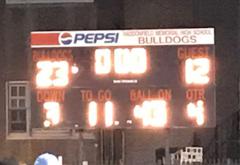