The Vikings followed the lead of Riley Tiernan and a strong defense to hold Shawnee ioff in the third meeting of the year between the two programs.

CHERRY HILL – It’s been said the definition of insanity is doing the same thing over and over again and expecting a different result.

That said each time Eastern and Shawnee meet in girls soccer the result is different but the game itself, rings eerily similar.

In the third meeting of the year between the two programs, Eastern (20-2) now owns a pair of hard fought victories, but this win will only serve as fodder for a potential fourth meeting with the Renegades (16-2-1) if the two clubs hold form in the South Jersey Group 4 final.

“It’s a shame really that we have to play them so much,” Eastern head coach Jamie McGroarty said. “It feels like it’s a battle of Olympic (Conference) teams every year. That’s a team that has the ability to win every day and we’ve worn each other down.

“Every year is different. It’s great for our program to win something like this because it shows what kind of year you are having.”

Early on both teams had chances, but Shawnee saw one really good chance turn quickly on the feet of Eastern’s Riley Tiernan, who has saved her best play of the season for tournament time.

A ball sent deep into the Eastern 18-yard line bounced around precariously until a bad touch sent it out where Tiernan took control. The Rutgers-commit sophomore took it down the field into the left side of the Renegades area. A pull-back gave her space from a defender and an easy pass across the box to Kelli McGroarty went one time into the back of the net for a 1-0 lead.

“Their sweeper hit one long out of the back and caught us off guard,” Shawnee head coach Drew Wagner said. “(Tiernan) in the open field is not something we wanted to see.”

Shawnee tied it up but Tiernan – who leads the team with 26 assists – found an opening in the waning seconds of the half to score her 19th goal of the season.

“(MgGroarty) pressured their goalie and the ball came back out to me,” Tiernan said. “The net was wide open.

“That was a big goal because it gave us momentum into halftime. We just had to keep the pressure up.”

“The ball went over the top and the save was made,” Wagner said. “(McGroarty) collides with our goalie who makes the save and it gets knocked loose. It’s just unfortunate for us.”

More to the point, the Vikings did what they have done on defense all year as they kept Shawnee’s top four scorers off the board. Combined Brooke Steele, Alex Kornafel, Alexa and Kiley Endres have 42 goals.

“(Sara Brocious) and I work together to make sure they were marked,” sophomore Nicolette Sacrduzio said. “We had to keep our heads after they scored. We’re very proud of what we accomplish in this program. Two straight years as Coaches Tournament winners is a big deal but we know we’re not done.

“It’s symbolic traditionally of the No.1 team in South Jersey,” Eastern’s head coach said. “So for a couple more days, that’s us. Then we start the state tournament and we have to earn it again.” 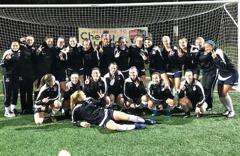