The High dominated all three phases of the game and aren't worried about past failures. Any team looking for the High in Group 2 now knows they've got the High.

The Panthers have found interesting, albeit maddening ways to derail recent seasons filled with plenty of high expectations. On Friday, they had a chance to exorcise a pair of losses to Delsea from the last two times the programs met in 2015 the Crusaders came out with victories. The second of which came in the Group 3 title game.

“You know how it is, we hit a little peak and then something goes wrong,” Camden head coach Dwayne Savage said. “We aren’t looking ahead. We have to stay consistent. We can’t worry about anything but the next game.”

That singular focus, an up-tempo approach and no small amount of revenge showed through in a 45-15 win over Delsea in a West Jersey Football League Constitution Division game. With the win “The High” is 2-0 in the division with wins over Cedar Creek and Delsea, with more than winnable games against Willingboro and Camden Catholic still on the docket. A win by Woodrow Wilson Saturday gives the Tigers a pair of wins over Creek and Delsea which if all things stick to chalk puts the Thanksgiving Game between the two inner-city schools in line as the Constitution Championship Game. Which is looking too far ahead for both programs.

“What’s it been, since 1976,” Savage said about Camden’s sectional drought. “Let’s worry about next week.

“Our offense was our defense because we haven’t run no-huddle all year. Our goal was to wear them out because a lot of their guys go both ways.

Camden (3-1 overall, 2-0 division) didn’t take much time to establish its presence adorned in gold uniforms that left no chance to hide on this night, not that it even thought about that for a second. On it’s opening drive, the Panthers went cruised downfield and opened the scoring on a 7-yard touchdown pass from senior quarterback Monte Williams to sophomore Corey Palmer. Palmer caught the ball on the left sideline, evaded one tackle and almost went down but kept the ball and his knees off the ground and easily score for a 7-0 lead.

Delsea (1-1, 1-2) knew what was coming during the third play of the drive as Savage yelled from the sideline “why are we huddling? Why?!?!?!” But knowing what’s coming and stopping it are two different things.

“We’ve run (the hurry-up) at times but tonight we wanted to go right at them,” said Williams, who threw for 158 yards with a pair of touchdowns and ran for another 97 yards and a score. ““For the offense to finally click was a great feeling.”

“The O-line put together a great game plan. They came through for us. They gave me time to pass, opened the holes for our running backs. It was just a great team win.”

Defensively, the Panthers shut down Delsea’s longstanding devotion to the Wing-T and with the exception of one toss over the middle, the Crusaders struggled to get much going throughout the evening.

““We talked all week about stopping the dive, stopping the pitch,” Savage said. “Whatever your assignment was, that’s what you had to do.”

“This game is over,” said running back Ramer Nook, who ran for 85 yards on 12 carries and three touchdowns. “We can celebrate for a little bit but we have to get right back to work. We aren’t going to let down. We can’t.” 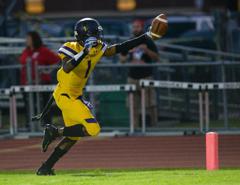