The Lions opened up an seven-run lead after three innings and didn't look back in a convincing win. They move on the face Olympic National foe Timber Creek, with whom they have split a pair of games, on Tuesday in the semifinal round.

BLACKWOOD – While there were certainly some players and coaches with long memories on the Cherry Hill sideline Thursday afternoon, Tyler Kubrak wanted to keep that memory separate.

“I remember that game,” Kubrak said. “It’s been part of my motivation for this year and all the hard work I put in this past offseason. But it’s not about Highland, it’s about the fact we lost.

“I’ve been grinding all offseason. It was about today.”

Cherry Hill West (12-9) jumped to an early seven-run lead after three innings and cruised from the point to a 13-2 win over Highland in the South Jersey Group 3 quarterfinals. The Lions will now host Timber Creek (13-11) next Tuesday after the Charger beat Central Regional 4-1.

“It will be the third time we’ve seen them this year,” said lefty Brian Robertson, who worked six innings of one-run baseball to get the win. “We’ve won a game and they won a game. This is for the season series and a shot at the final. There will be no surprises on Tuesday, we know each other that well.”

“We respect their program and how (Highland) plays,” West manager Dan McMaster said. “They beat us last year and really, we had to leave that to last year. We knew it would be a tough day and we also knew that even with a lead they have the ability to come back. They are an emotional club. The goal is to get a lead and not let them get going. That’s why we had to keep the pedal down today.

“I’m sure we will see them again in Group 3 next year. It’s a good rivalry building but it’s also part of our makeup that we represent the Olympic Conference. We are battle tested and this is a game we have to show that type of mentality. It’s something we know Creek will bring on Tuesday.”

West jumped on Highland for three runs in the first but gave up one in the bottom half of the frame to lead 3-1. That’s when West put up possibly the two biggest runs of the game.

“We stress shutdown innings,” McMaster said. “We held them to one run but we needed to get back on them quickly.”

After a walk and a strikeout, Kubrak singled inside the third baseline to put two on against Joey Rappaport, who entered to start the second for Todd Cavallaro. Kubrak, 2-for-3 with three runs scored and three RBIs, moved to third on a double by Jack Owens and then scored on a sacrifice fly for a 5-1 lead.

Meanwhile Robertson had the Highland offense on its back foot for much of the afternoon. A pair of double plays certainly helped as he worked five straight scoreless innings before he was lifted after one hitter in the seventh. In all he struck out five to get a win that gets West into the semifinal for the first time under McMaster.

“It was big to get and early lead,” Robertson said. “My job is to throw strikes and the first time through I did. The second time through the order, in fact from the second inning on, my changeup was really working today and when I have confidence in that pitch I’m much more effective.”

“Give all the kids credit,” McMaster said. “They showed up today focused and we executed all day long. We have some time to get ready for the next round and we’re excited to still be playing baseball.” 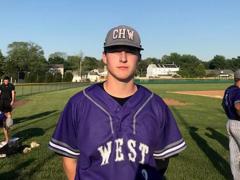 Cherry Hill West starter Brian Robertson went 6-plus innings and allowed just one run on four hits to get the win in the South Jersey Group 3 quarterfinals.