Wrestling: Corey Fischer leaves Region 7 bloodied but as a champion

Wrestling: On Saturday Region 7 crowned 14 champions and the West Deptford junior has a future scar to prove it.

TOMS RIVER – Corey Fischer knew early in on the 160-pound Region 8 final that the mask simply wasn’t going to work.

The West Deptford junior reached the final as the top-seed but in the semifinal match he had suffered a head injury. He wasn’t quite sure what happened but a gash above his left eyebrow almost cost him the bout with blood-time.

“I wore the mask for a bit in the final but (Rancocas Valley’s Daequan Jackson-Swope) kept getting his hand in it,” Fischer said. “It was just easier to go without it.”

Fischer (38-1) was one of 14 wrestlers crown Region 7 champions at the Pine Belt Arena on Saturday afternoon. Joe Manchio of Seneca entered the record book with his fourth title and Cherokee’s Colin Wickramaratna overcame three years of disappointment – much of which came at the hands of Manchio – to record his first title. Both Camden Catholic, ranked No. 2 in the SJSD Top 10 and No.1 Paulsboro left with a pair of champions (the Irish with Lucas Revano and Anthony Croce and Paulsboro with Santino Morina and Georgio Mazzeo) but the Red Raiders showed why they finished atop the rankings as eight advanced to next week’s state championships at Atlantic City’s Convention Hall.

For Fischer, smiling despite a small trench over his left eye, the title was special enough even though he still has plenty of work to do.

“I don’t think I wrestled my best this weekend,” Fischer said. “There are still things I need to improve on. I can’t make the same mistake next week.

“The eye isn’t an issue. It’s a little swollen but I can wrestle better. But I’m really happy I won. I guess I know that’s the bigger thing.”

For Mazzeo, it took everything he had to win 7-5 in an ultimate tie-breaker against Jackson’s Vincent Scollo. The sophomore (29-7) had his hands full and had to adjust his mindset as the top-seed at 103 pounds.

“Yeah there was more pressure on me because I was the top seed,” Mazzeo confessed. “It was something that I wasn’t used too but that doesn’t mean I change my approach.

“In a tough spot you fall back on all the training and hard work you put in. When I got into overtime it was about adrenaline. The only way to win at that point is to not overthink and rely on everything you’ve done up to that point. I have the best coaches in the world and they had me prepared for this.”

Craft, a junior that improved to 36-1 on the year, battled Paulsboro’s Brandon Green into overtime. In one of the toughest weight classes in the state, Craft and Green are two of the best along with Haddonfield’s Christopher Bolletino. Green, a sophomore that will travel to Atlantic City with an impressive 37-6 record, the third seed held a lead throughout much of the match until a takedown late in the third.

“I knew I had to get that takedown,” Craft said. “That’s the type of match you get at this level. No one is going to dominate. It’s about each point. Once I pushed it to overtime I felt it was mine to win.” 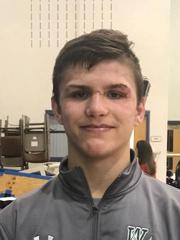 West Deptford's Corey Fischer wearing the scars of a champion.

The top four place winner at each weight advance to next weekend's state final at Atlantic City's Convention Hall.