CHERRY HILL – Within the last month, Harrison Hinojosa made a big decision.

As late as January 20th, Hinojosa wrestled at 126 pounds, but the sophomore needed a change. A change that Camden Catholic head coach Matt Walsh never quibbled about and, on Friday night, it made a big difference against St. Augustine.

“He came to me and said he couldn’t stay at 126,” Walsh said. “I wished he had stayed heavier earlier in the year, but he wanted to give it a go. Some kids like to try and stay at a lower weight. It’s amazing the difference now because tonight he won a match at 160.”

After he weighed in at 154, Hinojosa secured a 6-2 win over St. Augustine’s Nick Marshall to put the Irish up six points with one bout left en route to a South Jersey Non-Public A title.

Camden Catholic, ranked No. 2 in the SJSD Top 10 forfeited the final bout of the night, but beat St. Augustine 30-29 on criteria B which went to the Irish after St. Augustine was docked a point during the 120 bout due to unsportsmanlike conduct by the Hermits bench.

“We don’t like to forfeit any weights,” Walsh said. “But, tonight, we didn’t want to take that chance of getting hit with a point, even though we felt confident we wouldn’t give up a pin. It was just better to be safe this time.”

“You serious,” St. Augustine head coach Bill Ward said when asked about the point deducted. “I was hoping to win that match, but we needed to win one more toss up match. I thought we were going to win (160) but we didn’t.

“That was the match. The last match was a toss-up, but it favored us. I thought we looked a little tired tonight. I felt we could have wrestled better, but that’s a good team over there. They beat us.”

Camden Catholic held a three-point lead when Hinojosa took the mat against Marshall. On a night that felt as if every toss-up match was decided by a point or two, Hinojosa had all he could handle against Marshall.

“I felt like I knew what he was going to do,” Hinojosa said. “Every match is about looking for your opening.”

The sophomore got that opening in the final 20 seconds as he secured a reversal and back points to clinch the match.

“I thought about (going up in weight) a lot. From the sidelines I really felt that I could get the same results up here that I got lower. I’m just glad to contribute.”

Next up for the Irish will be a match against Bergen Catholic, a program that is not only ranked No.1 in New Jersey, but second in the nation by InterMat, on Sunday night for the Non-Public A title. 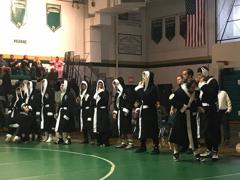 *St. Augustine had one point deducted for unsportsmanlike conduct