WASHINGTON TOWNSHIP – Shane Snyder has been around long enough to know that results matter more than style. The veteran head soccer coach at Washington Township fully grasps the concept that sometimes the best results come from just simple hard work.

“We play in a conference where every game is physical,” Snyder said with a broad smile. “I didn’t think today would be any tougher.

In other words, do what Michael Funaro did and anything is possible.

Funaro scored with 1:36 left in the first half and behind an unyielding defense that allowed one shot on net over 80 minutes Washington Township beat Rancocas Valley 2-0 in the South Jersey Group 4 Final on a blustery Friday afternoon. The Minutemen (21-2-1), ranked No. 1 in the SJSD Top 10, have now taken the last four titles and will look to win their third state title in four seasons over the next week with the next step a Group 4 state semifinal game at Rowan University on Tuesday against the winner of Friday’s Princeton at Hunterdon Central game.

The boys team will be joined by the Washington Township girls’ team, who beat Toms River North 2-1 on Thursday to advance to the Group 4 girls’ semifinal at 5 p.m. also on the Rowan turf against Freehold Township.

Of course, before that, Township had to take care of business against a Rancocas Valley (14-7-3) squad that has played its best soccer of the year over a seven game span in which it went 5-2. One of those losses was in the Coaches Tournament Final to Washington Township and when one considers last year’s South Jersey Final ended 2-1 in favor of Township over Rancocas, there were no secrets on this day.

“We knew exactly how this game would be played,” said senior center back Ed Rainey, who along with Will McCusker along the back line shut down every transition the Red Devils attempted. “We’ve now played them three times and for us, we’re happy that we came out on top each time.”

“It’s always a good game when we play them,” said senior Josh Strickon, who helped control the middle of the pitch with junior Arturo “Toe” Serano. “I think today the wind was an issue, but more of something you had to work through on the mental side. It’s about focus and technique more and I think we did that better today than they did.”

Rancocas Valley chose to play into the wind in the first half, but that actually worked into Township’s favor as Snyder would have chosen to go with the wind in hopes of getting out to a quick start.

The Minutemen dominated the first half and had a half dozen chances to score but put just four balls on net. The Red Devils meanwhile struggled to get across midfield but after 38 minutes the game remained scoreless and something had to change.

In front of a raucous crowd, Sean Zemlak gained control of the ball just inside of midfield. The junior launched a wind aided ball into the penalty area and that’s where Funaro was waiting for a chance to change the game’s development.

“It was definitely an interesting goal,” said Funaro, who scored his fifth goal of the season.

Rancocas Valley keeper Nick Mulkay battled the sun and the wind but initially got his hands on the long ball which felt more like a punt in the NFL then a cross in soccer. Mulkay bobbled the ball and when it fell to the ground Funaro seized the moment.

“I saw the ball coming in so I crashed the net,” Funaro said. “I just followed the ball. I ran right at the ball and put it in the net.’

Up 1-0, the Minutemen played some of their best soccer of the day in the all-important opening ten minutes of the second half. In fact, their pressure kept Rancocas Valley on its heels for large stretches of play throughout the second half.

“To me I’m most proud of how we opened that half,” Snyder said. “That was huge. Think about it, against the wind, we could have been stuck down that end but we were able to work an attack.

“You really can’t say enough about these boys and how well they played today and over the last month.”

Fittingly, on a day that Township moved the ball with plenty of style, it took a second gritty goal to put it away as with just over three minutes left it went up 2-0 on an own goal.

Not that anyone is complaining after a fourth straight title.

“It feels incredible,” Rainey said. “Ever since I was a freshman, we’ve won it every single year.” 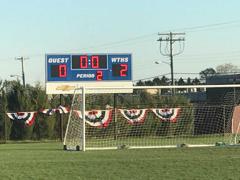