1. Eastern (11-0-0) 1: After a full month of the season, Eastern has brushed aside any thought of this being a rebuilding year and handled every challenge thrown at them through 11 games. Plenty of hurdles remain in the Olympic American including a trip to No.2 Washington Twp. but the Vikings will be ready.

2. Washington Twp. (9-1-1) 2: A trip to Shawnee resulted in a scoreless tie but that doesn't diminish what the Minutemaids have accomplished this year. If they have any hope of a division title a win on Oct. 12 against Eastern is imperative.

3. Kingsway (9-0-1) 3: A relatively quiet week with a 4-0 win over Hammonton has the Dragons rested and ready for an interesting visit from up and coming Delsea next Wednesday.

4. Cinnaminson (8-1-1) 4: The Pirates appear to be gaining steam with the postseason on the horizon. Watch as they work to get the best seed possible for the Coaches Tournament which they look to host the first two rounds.

5. Haddonfield (7-1-0) 5: A Thursday afternoon showdown with Rancocas Valley will be a good out of conference game for the Dawgs. They'll be well rested since they haven't played since Sept. 26.

6. Oakcrest (8-0-1) 6: The Falcons are still looking for respect from around South Jersey as they currently sit 12th in the Coaches Poll that determines seedings for the Coaches Tournament which begins on Oct. 20. They have a signature win over Ocean City and would like to avoid a trip to Cinnaminson or Haddonfield to open the tournament.

7. Ocean City (10-1-0) 7: With only a loss to Oakcrest, the Red Raiders have Oct. 11 circled with a visit from the Falcons on the docket and a division title on the line.

8. Delsea (11-0-0) 9: Perfection is one thing, Delsea needs a signature win and a visit to Kingsway may be just the thing. No matter what the Crusaders are the class of the Tri-County Classic and will hope to make plenty of noise in the Group 3 tournament.

9. Burlington Twp. (7-2-0) NR: A 2-1 win over Rancocas Valley earlier this weeks proves the Falcons are for real. They remain just a 1/2 game behind Cinnaminson in the Liberty Division and won't get another shot at the Pirates until late October.

10. Rancocas Valley (7-3-1) 10: The Red Devils have had a solid schedule and have taken a lump or two. Even with that they have shown an ability to compete at the highest level. 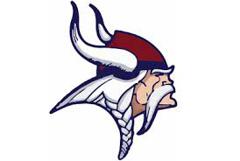