College: Mark serves as honorary captain for U of Miami football opener

Greg Mark was the honorary captain at the University of Miami football opener on Saturday – 30 years after he helped the Hurricanes win the national title.

When the former Pennsauken High School great strolled out for the coin toss at Hard Rock Stadium, Mark felt “it” again.

“When I walked out with the other four captains, the four players, and I got that smell of the grass, and for just a split second I was ready to put the helmet on and get after somebody,” Mark said Tuesday night from his home in the Coconut Grove section of Miami.

“But then it came back to me that these kids are bigger faster and stronger than me,” Mark said. “But that smell of the freshly cut grass, I would've ran through a brick wall for Coach (Mark) Richt.

“It was a great experience and I was glad I could be a part of it.”

Standing on the field before the Hurricanes 41-13 win over Bethune-Cookman in a Miami football t-shirt, Mark still looked like the All-American defensive end for Miami when he was a senior in 1989. At 6-foot-4, 252 pound, Mark was a starter on the Hurricanes' national championship teams as a senior and a sophomore.

“It seemed like yesterday - for a second,” Mark said with a laugh about his playing days at The U on teams that are still considered among the best ever in college football.

Mark was a senior on the undefeated and South Jersey Group 4 champion Indians, coached by Vince McAneney, which is considered one of the best teams in New Jersey history.

Mark and David Griggs were the most dominating bookend defensive ends I ever saw play in high school. Both went on to play in the NFL. Sadly, Griggs died in a car accident in 1995, just a year after starting at linebacker for the San Diego Chargers in Super Bowl XXIX.

Mark, who was drafted by the New York Giants in the third round in 1990, played in six games for the Eagles and Dolphins in 1990 before returning to his alma mater as an assistant coach.

I've been fortunate to be around winning coaches winning programs and winning traditions,” Mark said.

“I played for some of the greatest coaches in the game.”

Mark was one of eight players McAneney sent to the NFL, including Griggs and his older brother, Billy, Dwight Hicks, Todd McNair, Keith and John Taylor and Darrell Wilson.

Two years ago, Mark returned to South Jersey for his induction into the South Jersey Football Coaches Association Hall of Fame.

Mark, 49, finished his career at The U with 253 tackles, 95 quarterback pressures and 34.5 sacks. In 1989, after collecting 15.5 sacks, he was a semifinalist for the prestigious Lombardi Award.

“It's great to still be involved,” Mark said about the Hurricanes’ program. “I had always heard that from the older guys, and I'm an old guy now, how they had such appreciation for being recognized.

“Now it's more of an appreciation, you can sit back and enjoy it. Personally, it's humbling and much appreciated and heartfelt.”

Mark was the honorary captain on the same day - September 3 – 29 years after Miami pounded preseason No. 1 Florida State 31-0. He was joined on the field by his wife, Jessica, and their three daughters - Remi, 15, Phoebe, 12, and Reilly, 8.

“I had my kids go on the field, it was like them going to Disney World,” he said.

Mark, who was elected to the Miami Sports Hall of Fame in 2003, was only the seventh honorary captain ever to be named by Miami.

“It's incredibly humbling and it was a great experience,” said Mark, who played at Miami with former Pennsauken teammate, Jason Hicks.

Mark, who grew up on Glenwood Ave. in Merchantville, now owns two Montessori schools in Miami Beach. He is in the path of Hurricane Irma. He said school has been called off for Thursday and Friday

“We are going to make a decision as a family,” said Mark, whose mother, Janice, lives in Haddonfield. “We might just get in the car and drive north.”

“Physically, we’ll be safe,” Mark said, “I'm just worried about my properties. It's one of those things you can't stop, all you can do is prepare for the situation and hope for the best possible outcome and whatever will be will be.”

Mark couldn’t be stopped as a pass rusher. And, once again, like he did as a player, Mark displayed his determined and positive attitude.

And he also still packs his Pennsauken Pride.

“There are only two things I know who are undefeated, the Pennsauken 1984 Indians and Mother Nature," he said. 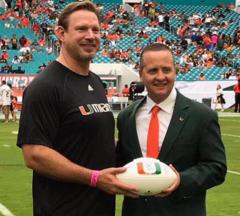