Pennsville explodes past No. Burlington

WASHINGTON TWP. — The 8-1 final score that Pennsville hung up on Northern Burlington was not indicative of how tight the contest was between two of South Jersey’s top teams Saturday afternoon in the quarterfinals of the Diamond Classic.

For four-and-a-half innings the score was 0-0.  Pitchers Mitch Walker of Pennsville and Zach Gakeler of Northern Burlington dueled, stranding runners in nearly every inning, pitching out of one jam after the other.

Finally, Pennsville’s three-hole hitter, second baseman Josh Shimp, got the game’s first big hit to drive in a run in the bottom of the fifth.  But the Eagles' lead was short-lived.

In the top of the sixth, Northern Burlington’s three hitter, Ryan Shinn, blasted a Walker offering deep over the left field fence to knot the score back up at 1-1.

With some teams, that could have taken the wind out of their sails, but not with Pennsville.

In the bottom of the sixth, the bottom of Pennsville’s lineup started a seven-run rally that put them on top and left the game well out of reach for Northern Burlington.

After Colin Rieger reached on an error, Austin Moore laid down a beautiful bunt that earned him a base hit and left runners on first and second.  What should have been a sacrifice bunt by Chase Flickenger turned into much more when Gakeler threw the ball over the third baseman’s head to bring in the go-ahead run.

“It’s strange how bunts are sometimes really hard to defend,” said Pennsville’s head coach Matt O’Brien “You may not think it. You practice it all the time with your bunt defenses, but it's hard to simulate that live situation.”

The error may have rattled Gakeler.  After the miscue, he proceeded to hit a batter and walk in a run before being pulled.  After the change, Pennsville’s cleanup hitter, Eric Lankenau, knocked a two-run single to make it 5-1. Pennsville’s next batter was Walker, who capped off the scoring with a three-run home run to make it 8-1.

“I don’t usually hit well when I pitch," Walker said. "It’s just a thing in my head, but I knew I needed to come out and get some more runs for us, get us a bigger lead.”

Said Walker of his pitching performance: “I just try to be a bulldog out there.  I don’t care who’s out there, who’s on base.  I just try to go out there and get outs."

Northern Burlington coach Rick Doppler said of Pennsville, “They had two perfect bunts and put pressure on our defense and came up with those key hits.  Our pitcher threw good pitches.  You just have to tip your hat to their team.  They had great plate presence.”

Doppler had his young ace, Galeker, on a pitch count of 80 Saturday. Ryan Shinn will throw their opening state tourney game on Monday, and if they win, Gakeler will be on the mound Thursday in the sectional quarterfinals.

As for Pennsville, it’s pretty simple what they have on their mind.

“We want to play Bishop Eustace,” said Walker, “We want to earn our spot as number one.”

Second baseman Josh Shimp agrees, saying “I want to face them so bad.”

Second-ranked Pennsville will face off against top-ranked Bishop Eustace Sunday at 1:00 p.m. at Washington Township in the Diamond Classic semifinal with the winner advancing to the 5 p.m. tournament championship game at Eastern High School against the winner of the other semifinal being played at Deptford at 1 p.m. between St. Augustine and Washington Township. 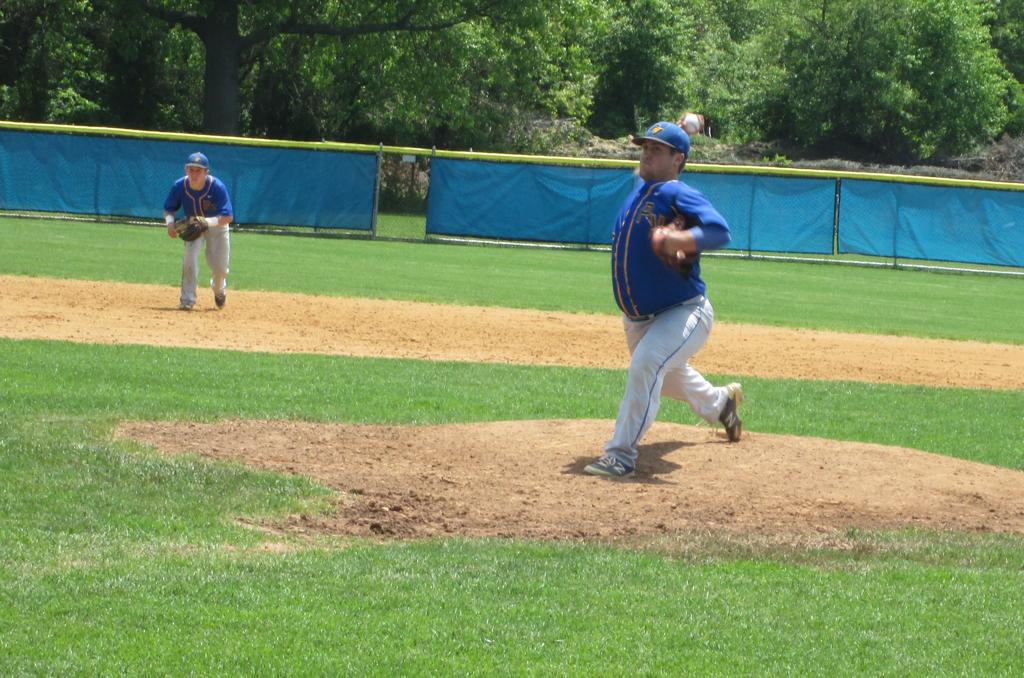 Pennsville winning pitcher Mitch Walker was in sharp form Saturday, powering the Eagles past Northern Burlington and into the Diamond Classic semifinals. PHOTO BY DAN ANGELO