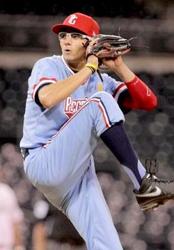 Devin Smeltzer is all about baseball and helping others.

The Bishop Eustace Prep senior star has overcome cancer to become an athlete who has earned an NCAA Division I college scholarhsip and could be a high selection in the major-league baseball draft in June.

But Smeltzer never forgets this past -- and that's why he's decided to combine his success on the baseball field with his passion for giving back to others who are going through a similar experience.

For the 2014 high school baseball season, Smeltzer and his family have started a “Strikeout Foundation” in which donors will be asked to pledge a dollar amount for every strikeout that he records on the mounds for the Crusaders.

Given Smeltzer's success on the mound, he should been able to have a strong fund-raising effort, especially if he receives the support he deserves.

South Jersey Sports Digest is pledging $5 for every one of Devin's strikeouts. We are encouraging our followers to support Devin and his cause.

Smeltzer is committed to raising money for Katie’s Krusaders, a foundation that helps kids with cancer at St. Christopher’s Hospital in Philadelphia. Recently the N.Y. Yankees and Tampa Bay Devil Rays took up Devin’s cause and helped to raise $35,000 for the foundation through a showcase event in Syracuse in late January.

Smeltzer is coming off a strong junior season as well as a successful performance in the summer and fall. He was 8-3 for Bishop Eustace last season with an 1.39 ERA and 109 strikeouts.

Smeltzer is looking forward to a strong season, both as an individual and for the Crusaders as a team. Bishop Eustace should battle rivals such as Camden Catholic and Paul VI in Olympic Conference play and will compete with those teams plus powers such as Gloucester Catholic and St. Augustine Prep in South A tournament action.

Smeltzer has no pressure when it comes to college as he has signed to attend Florida Gulf Coast on a baseball scholarship. But he could jump directly to professional baseball if he is a high selection in the major league baseball draft -- and several scouts regard him as an intriguing prospect because he's a hard-throwing left-hander and also a top athlete.

Smeltzer has come an incredible distance since he was diagnosed with cancer just before his 10th birthday.

He was diagnosed with rhabdomyosarcoma and prostrate cancer. It was August 5, 2005 when his family learned of his condition.

A rhabdomyosarcoma, commonly referred to as RMS, is a type of cancer, specifically a sarcoma (cancer of connective tissues), in which the cancer cells are thought to arise from skeletal muscle progenitors. It can also be found attached to muscle tissue, wrapped around intestines, or in any anatomic location. Most occur in areas naturally lacking in skeletal muscle, such as the head, neck, and genitourinary tract.

To a parent this news is devastating and to a 10 year old boy who just wants to play sports and hang with friends the news is confusing. Faced with going through intensive treatments and life-altering events, some kids may shut down.  Not Devin, he embraced the challenge with a very positive attitude and took it on head first.

As he went through chemo therapy and radiation he lost 30 pounds going from 80 pounds to just 50.  Because of the weight loss he was threatened with the possibility of having feeding tubes put in, but the physicians told him if he had to have them it would be the end of baseball for him.

The threat of not playing baseball was all Devin needed to eat, gain weight and not have those feeding tubes put it.  He played baseball through his treatments for the South Jersey Young Guns and Gibbsboro-Voorhees Athletic Association, never looking back. He finished his treatments on August 12, 2006.

Devin has been given a clean bill of health since then and according to him “living the dream.”

And through baseball he has dedicated his life to giving back to those who are fighting what he fought.

“Every time I play I play for the kids with cancer and those who didn’t make it,” Smeltzer says.

It is important to Devin to give hope to kids who need a role model or success story to give them some hope.  He wants them to know there is light on the other side.