Her grandfather was a long time Washington Twp. hoops coach; her parents were both outstanding athletes at the school

As a member of a family that has experienced a rich basketball tradition, Emily Johns figured her destiny was simply meant to be. And what a ride it has been!

And is it any wonder she has enjoyed a brilliant career under coach Jenn Natale? Emily’s mom and dad, Daniel Johns and Carolyn (Blank) Johns each graduated from Washington Township High and received college athletic scholarships. Her mom teaches in the district and still serves as an assistant coach for the varsity team. Emily's grandfather, Charlie Blank, served as a long-time South Jersey girls and boys coach at several schools, including Eastern, Washington Township and Paulsboro. He was also a former University of Maryland basketball player who was inducted into the Camden County Sports Hall of Fame in 2018.

"Sports has been my whole life, and growing up around my parents and other family members just made me more motivated to accomplish a few things myself," said Emily, who added that her participation in athletics began early in her life.

“I was 4 or 5 years old and on my Mom’s cheerleading team – but my grandfather would sometimes pull me away and would say ‘Em’ would you like to work out in the other gym. I just fell in love with the game and got better and better every year.”

Emily’s family also was good friends with current Township coach Jenn Natale throughout Emily’s childhood, so the eventual transition to the high school game proved smooth. By the time Emily entered WTHS, she and several of her teammates, including Rachel Roda, Katie McCusker, and Julia Marino, had already played together several years and had built a solid team chemistry. The foursome helped the Minutemaids to a 20-7 record in 2018-19 and a current 14-5 mark this winter.

“I always had quite a comfort level with my teammates and the coaching staff, “ Emily commented. “We were a family and we knew each other’s strengths and weaknesses.”

Emily has built quite a resume, one that landed her a scholarship at D-1 American University in Washington, DC. This season, the 6-1 center has scored 307 points in 19 games for a robust 16.1 points per game average along with 10 rebounds per game. That followed a junior season in which she averaged 15.8 ppg on her way to her 1,000th career point in February 2019. She was selected as an All-South Jersey player as a junior and in her career was named All-Olympic Conference three times.

Emily always knew the importance of developing her personal game if she wanted to advance to the next level at a Division I college. Emily, naturally, was highly recruited by coaches up and down the East Coast, including Rider University, but settled on American U., where she will major in graphic design.

“I wanted to be versatile, and that’s important if you want to play at a high college level,” she said. “That’s why I really worked on my outside shot and also evolving into my leadership role the past two seasons.”

American University Coach Megan Gebbia has high hopes for Emily, as she noted on National Signing Day: "Emily is a 6'1" forward that is a perfect system-fitting post player. She will bring some much needed physicality to the low post along with tremendous footwork, hands, and touch from the perimeter. She already has experience running a motion offense which will help smooth her transition into the college game."

But before Emily ever steps onto a court at AU, she and her teammates feel there is unfinished business on the court. Her efforts have helped Township – which recently dropped a heart-breaking one-point decision to Olympic Conference power Cherokee -- emerge into one of the top contenders for a South Jersey title.

And that, she insists, will be the perfect ending to an already brilliant career.

“We know we can contend with the top teams in South Jersey, so our goal is go all the way in the sectional playoffs,” Emily said. “We don’t want our careers to end any other way.” 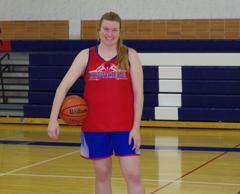