Scott Shaw hit a two-run, one-out home run in the top of the seventh on the way to West's first sectional title since 1993

RUNNEMEDE – With one out in the top half of the seventh, Triton – 2019’s version of the Cinderella Comeback Kids and a damn good team along with a damn good story – looked like it had another chapter that needed to be written.

The Mustangs, seeded No.1 in South Jersey Group 3, held a one-run lead over No.2 Cherry Hill West. A three-run outburst in the fourth erased yet another deficit and for a program that has won 13 times without a loss this year in one or two run games, the final result seemed imminent.

That said Cherry Hill West had not seen the script. The Lions had reached the South Jersey Final for the second straight year and knew the Mustangs (20-4) – surrounded by the ghosts of 1970 when the program last won a sectional title – needed 21 outs to earn a win.

“We knew we still were in this game,” Scott Shaw said. “We have thought about this game for a year.”

Shaw hit a two-run home run and the Lions tacked on two more in the seventh for a 6-3 win over Triton to secure its first sectional title since 1993, which ended a five year stretch of titles. West (25-3-1) will play Wall on Monday in the state sectionals at East Brunswick.

“We gave up three tough runs but that’s baseball,” West head coach Dan McMaster said. “But so is the way we came back. That’s why you play seven.”

Triton starter Colin Taylor worked into the seventh and got one out before a walk that eased his pitch count up to 110 and, by rule, ended his afternoon. Matt Woods took to the mound with a 3-2 lead and after a ball, tried to get a curveball past Shaw who promptly deposited the offering over the right-centerfield wall.

“I knew it immediately,” said Shaw, who went 1-for-3 with a pair of runs scored. “I had a green light and (McMaster) told me to make something happen.”

The Lions tacked on two more runs, but the damage had been done.

In fact, the key may have been the sixth inning when the Lions didn’t score on Taylor but effectively put the Mustangs starter in a hole.

The Lions made Taylor work and loaded the bases, while they didn’t score, they pushed the pitch count up and all but turned the lineup over which gave Shaw - the No.2 hitter – a chance to be the hero.

“We said that exact same thing in the dugout,” McMaster said. “We just needed to get the top of our lineup a chance to make a difference. We didn’t score but we knew the pitch count was high and we knew where we were in our lineup.”

It didn’t hurt that Shaw also made the defensive play of the game. Up 2-0 in the third with one on, Woods drove a ball to the same spot that Shaw did four innings later. Only Shaw, the Lions centerfielder, tracked it down and crashed through the fence to end the inning.

“Yeah, I’m glad that’s not a permanent fence,” the senior said. “It would have hurt a lot more. But I would have survived as long as we got the out.” 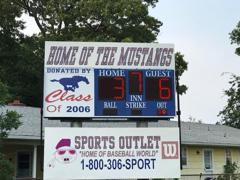