The Vikings waited out a 1:08 rain delay to beat the Braves 5-2 to advance in Group 4 Tournament

VOORHEES – The decision Eastern baseball manager Rob Christ made on Thursday afternoon proved to be a simple one.

The Vikings, the No.3 seed in the South Jersey bracket of the NJSIAA Group 4 baseball tournament held a one-run lead over No.11 Williamstown with two outs and a runner on first in the top-half of the fifth inning. One out away from an official game, a storm raced through and shut down play for over an hour. While Sam Portnoy had certainly pitched well, an hour-long delay meant Christ had to decide whether to continue with Portnoy or move on to a reliever.

“One of the reasons I’ve had success in my career is that I’ve always trusted my players,” said Christ, who has won 401 games including 297 with Eastern in 22 seasons. “That’s all this was really. I trusted my players. I asked Sam once we came back to the field and he said he was ready. I pulled my catcher aside and asked if Sam was good and he said definitely. I went with what my players said.”

Portnoy got the final out of the fifth and the next six in a complete-game win over Williamstown 3-2. Eastern (19-8) will host Olympic Conference American Division rival No,.15 Cherokee (9-12) on Tuesday in the semifinal round. Cherokee defeated No.10 seed Clearview 14-2 on Thursday and isn’t even the lowest seed in a shattered bracket that still features 16th-seeded Egg Harbor Township in the semifinals.

“To be honest I felt better after the rain than I did at the start of the game,” said Portnoy, who struck out just three hitters. “I pitched to contact today and let my fielder’s do their job.”

With one on, Portnoy went up against freshman first baseman Ryan Achey. As Portnoy said, he pitched to contact and Achey drove a ball to within sight of the right field fence as AJ Funari settled under it to end the frame.

“Yeah, off the bat I was a little nervous,” Portnoy confessed. “That ball was hit hard but that’s all a part of the game. I saw AJ heading over and I could tell he was going to get under it.”

In the third, Funari, who also had an RBI single in the first inning that put the Vikings up 3-1, made an even bigger defensive play. With a runner on first and Eastern holding a one-run, one-out lead, Brett Wichrowski drove a ball into the right field corner. Funari not only tracked it down on the run, but doubled off the runner, who had taken off in a hit-and-run, at first to keep the game at 3-2.

“The first thing was catching the ball,” Funari said. “That was it.

“The play was in front of me and I did see him take off but after the ball got hit, I didn’t think about the runner. After I caught it, I heard all of my teammates screaming get it to first.

“I know that’s a big play in this game. I don’t get there, it’s probably 3-3 and they have all of the momentum.”

For Christ, it may have been the biggest play of the game.

“There are a ton of little things in every game you know can change it,” Christ said. “But the play he made on that ball definitely gave us momentum."

For Eastern, the road doesn’t get any easier and even more to the point, there will be no secrets. 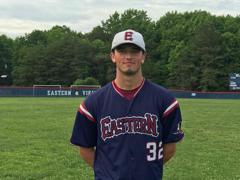