The left-handed starter knew what was at stake. He understood what the all-too often thought about pitch count indicated. A member of one of the bigger senior classes in manager Brian Anderson’s tenure, he knew that his next three pitches were of the utmost importance.

“I knew going into the (sixth-inning) I had about 20 pitches left,” said Balzan, who hit the 110 threshold on the button. “That was a big out to end the inning.

“In the fifth, they loaded the bases and I got a strikeout there so this was a really great win for us.”

Shawnee beat Haddonfield 2-0 in the final of the Joe Hartmann Classic. The Renegades (17-5) secured the second title in school history, the first coincidentally came in 1990 against Haddonfield, by virtue of two manufactured runs and dominant pitching that scattered six hits.

"We feel like we can play with anybody," Anderson said. "As any Olympic American coach would say, to get through that division you feel pretty confident when you leave that division. We respect all of the teams that we played, but the Olympic American schedule is like a mini Diamond Classic every time we play.

Haddonfield (16-3), out of the Colonial Conference, proved more than up to the task of pushing the Renegades. Starter Chris Brown matched Balzan pitch for pitch and if not for an error in the third inning that allowed one run to score, Brown easily could have been the focal point of a win.

“That’s a great game played by two quality teams,” Haddonfield manager Bob Bickel said. “We had chances to score but couldn’t push a run across. But this season isn’t over and now we have to focus on our next goal which is the state tournament.

For Shawnee, the focus also shifts to the Group 4 Tournament where it will be another day in and day out conflict.

“Our conference certainly gives us a way to be prepared,” said Balzan, who will open the Group 4 tournament against Egg Harbor Township next Monday. “We lost a lot of quality players from last year. We had a lot of highly recruited guys who went great places.

“This year, we came in without many people noticing us. But the team chemistry we have is unbelievable and it’s why we are here today.” 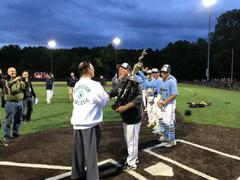