HAMMONTON – Hammonton’s Mike Walter approached his start against Kingsway in the simplest of terms.

“The coaches wanted me to get as deep as I could and keep my pitch count down,” the senior said. “I just went after the strike zone and let my team work behind me. I knew they had my back, I just had to play my role.”

Walter worked seven complete innings, with eight strikeouts – which included a perfect seventh in which he struck out the side – and allowed just a pair of hits in a 5-1 Tri-County Conference Royal Division win. The win moved the Blue Devils (12-6 overall, 5-3 division) firmly into second place but more than likely just prolonged Kingsway’s (11-6, 4-2) title. That said the Blue Devils have already begun to focus on what lies ahead over the next few weeks.

“This is a good win for us,” Hammonton head coach Gregg Silvesti said. “We have the (Group 3 state tournament) in a few weeks. We have the ability to win it all even though it is a stacked group. We’re playing well and you can see today how good we can be.”

Through the first three innings the only runner to reach for either team was on a walk in the second to Hammonton’s Jared Beebe. In fact, Walter went through the first 10 hitters he faced without as much as a flinch.

“I got in a good rhythm,” Walter said.

With one out in the fourth, opposing pitcher Josh Conway singled and after a courtesy runner entered, Kingsway picked up its only run on an RBI single by Caleb Ritchie.

“They got a run but I really felt holding them to one was important,” Walter said. “I knew we could come back.”

Hammonton did just that as Luke Attanasi led off the home fourth with a double to the wall in left. After he moved up on a passed ball, he trotted home on a ground out to second to tie the game at 1-1.

“I knew that would be big,” Kingsway manager Bill Alvaro said. “That’s the inning you need to shut them down. They had their 2, 3, and 4 hitters coming up. We get through that and maybe it’s a different game.”

In the fifth, Hammonton put the game on ice on an RBI single by Attanasi. After which a bases loaded single gave the Blue Devils a much-needed cushion.

“In the fourth my goal was to just get on base,” Attanasi said. “We were only down one run. Even then we knew we needed to respond quickly. The beat us pretty good the first time we played against them and we know what they can do offensively.

“This is a big win for us. We want to build momentum going into the playoffs. We know we have a shot to do something special.” 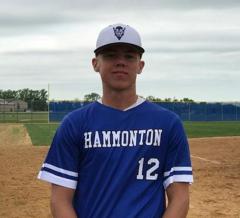 Hammonton senior Mike Walter allowed just two hits in seven innings of work and struck out eight to record his fifth win of the season.